This morning after Gia’s preschool drop off I thought it would be nice to grab a second cup of coffee from my favorite local place, Farm & Flour.  It was slow enough inside that Vivi could roam around without getting in the way of the employees or disturbing guests who were working on their laptops.

While waiting for my cappuccino, I followed Vivi’s lead and ended up at a table occupied by two friendly women who peppered me with questions about Viv, her hair, if I had more children, and if they had that much hair too.  (It’s funny how Gia and Viv’s hair is one of the first things people notice about them.)  After telling them that both of my girls were born with very full heads of hair I grabbed my coffee and gave Viv her snacks to munch while she walked around.

Low and behold, we ended up back were we started, talking to the same two women again.  One of them got up to leave and I had a nice chat with the woman who remained.  I have seen her there many times before, usually seated in the exact spot she was currently occupying,  She had a leather notebook open in front of her, filled with the most beautiful handwriting.

After seeing her notebook I immediately became conscious of the fact that we might be disrupting some kind of work she was doing.  I asked her if we were bothering her and she told me that we weren’t at all.  She said, “children are my work,” while smiling at Viv.  I asked if she was a teacher and she told me she taught preschool at our local Montessori school.

For some reason I felt comfortable talking to her about things that I don’t share with people I’ve just met.  We chatted for a while about motherhood, school, staying at home with kids versus working, writing about my experiences on my blog, and the ups and downs of raising children.  She mentioned she didn’t have any kids of her own, but she was sure to tell me that I’m doing a great job.

There was something about our brief interaction that really made me feel good.  I doubt people think this much about their day to day interactions with others because we are all in such a hurry.  To be honest, we are so consumed in ourselves that we don’t often notice others or have the chance to talk the way I did with this woman today.

When I was just about finished with my cappuccino, Vivi noticed a dog that came in with two men.  I’m assuming it was a service dog, because he eventually sat down next to the two men inside the coffee shop.  Of course, Vivi had to toddle over towards the dog and investigate.

Initially, when I saw the two men come in I wanted to grab Viv, pick her up and keep her from going near them.  I hate that I felt this way and I’ll tell you why:

One of the men was an amputee in a wheelchair, possibly a war veteran based on the hat he was wearing.  The other man was a bit disheveled looking and his clothes were dirty.  I didn’t feel proud that this was what made me want to keep Viv away from them, but it was the fact of the matter.  Then, after thinking all of this in my head, I noticed a woman get up and leave, seemingly because of the men who came in.  This upset me a little bit and made we want to change my attitude of judgement towards them.

I set Viv down and let her roam again – yes, she went straight for the men and the dog. This time I followed closely and said hello to them as they smiled at my daughter.  I don’t know if they thought much about it or not, but I feel like they were surprised we came over to say hi and ask about their dog.  This was just a small interaction, but for me it was impactful because of how it shifted my thinking and how I wanted these guys to feel included, not ostracized.  For all I know they could have been victims of the raging fires in our area who just needed to escape the smoke.  Either way, I’ll remember how our interaction made me feel — good.

Finally, I decided it was time to start heading home to get Vivi down for her nap before heading back out again to pick Gia up from school.  On my way out there was a fire fighter from Cal Fire seated with a woman having toast and coffee.  I made a point to stop and I said, “Thank you for everything you’re doing,” while surprisingly trying not to cry.

The man and woman smiled at me and the man gave me a look of appreciation.  He pulled out a sticker and asked if he could give it to Vivi.  I took the sticker and jokingly said that my husband would kill me for bringing home more fire fighter paraphernalia.  He laughed and jokingly responded that police and fire are always at odds.

I shared that we have family and friends who are fire fighters and made it clear that we love and appreciate their work, just as much as we appreciate those in police work.  We talked for another couple of minutes about what city my husband is a police officer in and where my brother-in-law is a fire fighter.  After that we said goodbye and be safe. 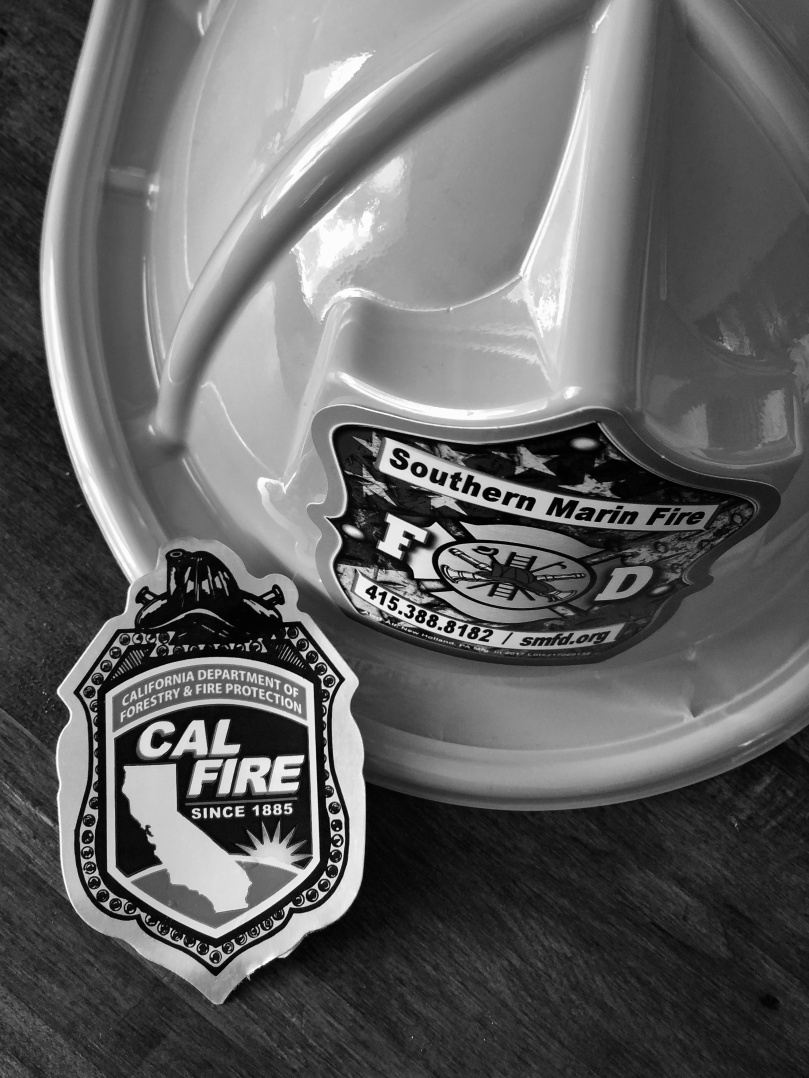 I find it interesting that I had three separate interactions in one place, each really striking a chord with me.  As we crossed the street to my car I cried for a moment and just felt emotional.  Part of me also felt really silly for crying, but it reminded me that we can still have these genuine human experiences when we least expect them.

I’m sure each of these people that I interacted with in the short span of 45 minutes will never know that they impacted my day in such a positive way, but it’s nice to know that these experiences aren’t lost on us.  We really do have the power to shift someone’s day.  Let’s try and make it a positive shift.