To my horror, this morning I, as well as countless others, woke up to news of the unfathomable tragedy in Las Vegas.  I picked up my phone upon waking and immediately saw news alert after news alert.  With each update, I saw that the death toll and injuries from this absolutely heinous act were climbing and climbing.  I couldn’t help but cry.  I’m so very saddened and shocked that this is the world we live in today.

I texted a friend who lives in Southern California, for I knew she had been in Vegas over the weekend, and I held my breath until I received a text back stating that she was okay.  After texting her, I remembered seeing via social media that a girl I had grown up with was also there with a friend of hers.  I messaged them as well – they were safe yet shook up.  I can’t even imagine.

I also cannot begin to imagine the pain, anger, sadness and grief that families are feeling right now.  Households that were once whole are now forever broken.  (I understand that this is not the only horrific event to happen as of late, but I feel compelled to share my thoughts and feelings.  I want everyone reading this to know that they should not politicize my words.  This is just me being human and feeling a wide range of emotions.)

So many lives are forever changed after what occurred last night in Las Vegas – people are without their parents, children, brothers, sisters, friends and acquaintances.  It makes me feel sick thinking that these poor people didn’t know what to do when they heard gun shots raining down on them for over 72 minutes.

Based on the news reports, it was utter chaos at the concert venue where people were trying to escape.  I cannot go without saying that there were many first responders at that Jason Aldean show, as off-duty concert goers.  I believe that those first responders made a huge impact last night in saving lives, in obvious addition to those on-duty.  Police, fire and EMS ran towards the danger while everyone was trying to get away.  The help and bravery of the first responders demonstrates true heroism.  If it weren’t for these people, who knows how many more lives may have been lost.

It’s awful that it takes the worst in humanity to bring out the best in people, but this is something that I think of on a daily basis.  Many of you know that I come from a first responder family and some of you might just be learning that now.

My grandfather was a firefighter who passed away in the line of duty, due to asbestos and smoke exposure – his death was the precedent setting case for the State of California for firefighters who lost their lives on the job.  He is forever immortalized on the wall at the Firefighters Memorial in Sacramento.

My brother-in-law is also a firefighter, as well as some of our very close friends.

My dad was a police officer for his entire career, working in a very busy city.  My father-in-law worked side-by-side with my dad for the same department.  Now my husband is also a police officer.  I hesitate in even mentioning this here because I know that there is so much tension around law enforcement in this day and age.

I was finally able to grasp the true meaning of what it is to be a first responder when I was the one sending them to calls for help.  There was a period before my husband became an officer where I was a 911 dispatcher.  I always knew growing up that my dad had a dangerous job, but I never thought about it much beyond that.  After being the person talking to the officers through their earpiece, I was able to grasp just exactly what my dad and father-in-law did every single day.  Now my husband does it and I have another unique perspective about the job because I am a police wife.

My everything in one photo: 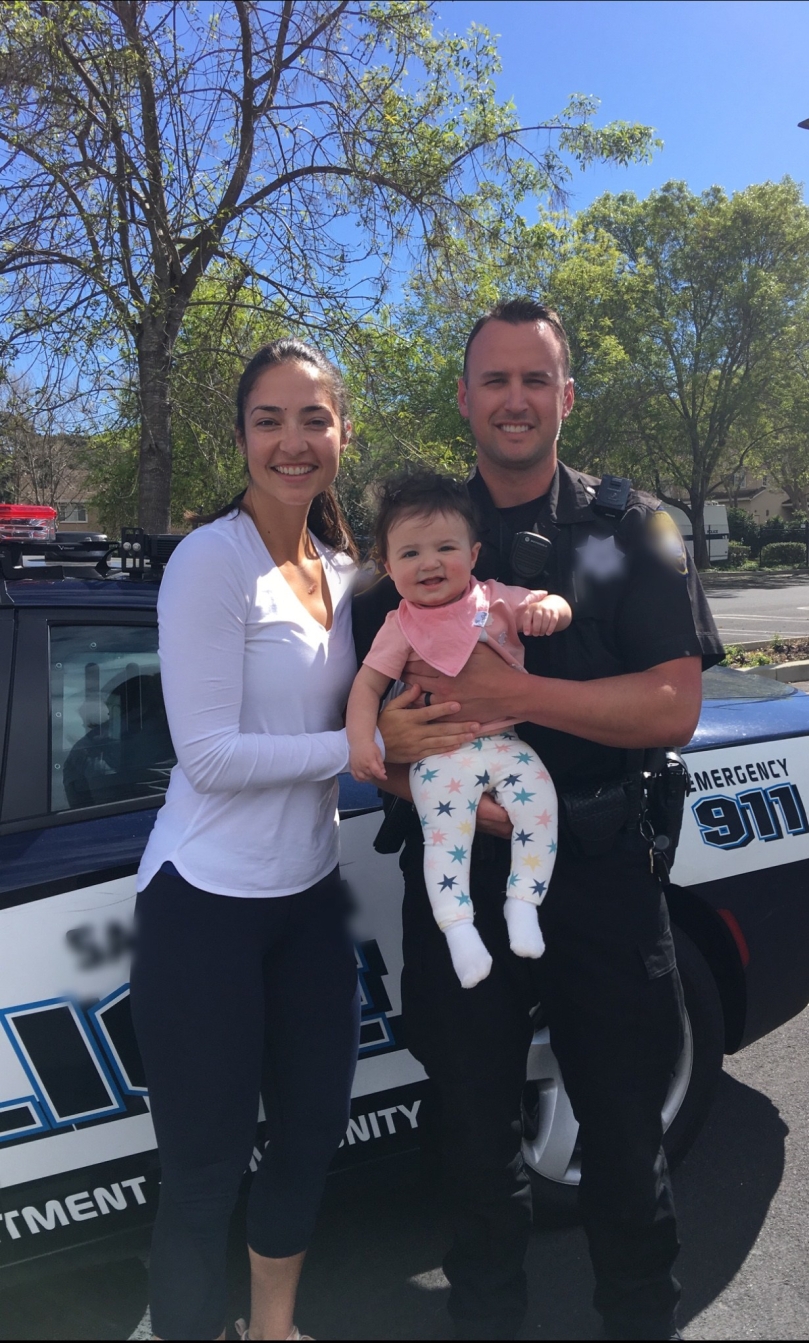 As I was waking up this morning, my husband, Craig, was coming home from work to sleep.  I asked him if he had heard about what happened in Las Vegas as I got a teary eyed.  I knew full well that he was aware of what had happened, since he had been up and working all night.  I told him that this is the kind of thing that I’m so very afraid of.  Call it tragedy, call it terrorism, or call it whatever you want – all of it is disgusting.

Now that I’m a mother to a beautiful little girl, I am so scared of the world we live in.  I might think a little bit differently than others, but I am always preparing for the worst.  For example, my parents, Gia and I went to San Francisco for the day over the weekend.  On our car ride there I told my parents how that I think completely differently about the world now that Gia is around.  (This is totally normal to a certain degree, but I think I take it up a notch.)  Just driving on the Bay Bridge into the city made me think about how it could be a prime target for an attack.  Then I thought about how we were going to the Ferry Building on the Embarcadero and how that is another potential target for a mass shooting or bombing.

Photo of my dad, Gia and I at the Ferry Building over the weekend: 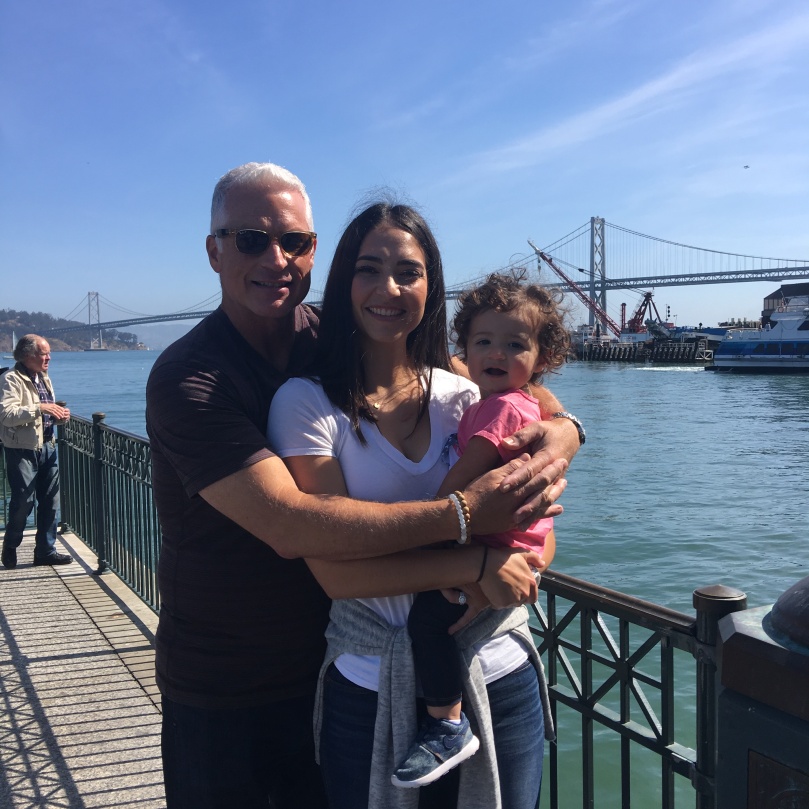 I know I cannot live my life in fear, but I am always on alert when I am alone with Gia.  Often I think of how I cannot let anything happen to me because I can’t leave her without her mother.  I’m so protective when we’re together and would jump in front of a moving train if it meant that she would be safe.  I know this is the feeling that many (hopefully all) parents have when it comes to keeping their kids safe.  It’s sad that I have to think about this on a such realistic level now.

I’ve only been to the movie theater one, maybe twice, in the last year, but even that experience has forever changed.  I think hard about where I should sit in case there is a deranged person who wants to harm everyone in the theater.  It’s just really very frightening that my mind even goes there.

I’m kind of starting to ramble on now, so I’ll wrap this up.  What I’m getting at is that there are people out there who go directly towards danger every single day.  They don’t think twice about it.  That is pretty amazing.  My hope is that you can walk up to someone wearing a badge and say “thank you.”  It doesn’t matter if it’s a police badge, a firefighter badge, a military badge, or an EMS badge – just thank them for what they do on a daily basis while we live our lives.  Many are quick to bash our first responders, but remember, they are the ones you call when you need help.

I know thoughts and prayers are never enough when tragedy strikes, but I offer them anyway.  My warmest condolences go out to everyone connected to the violence in Las Vegas.

Las Vegas is in desperate need for blood donations.  Here is a list of locations where you can donate if you live in Nevada: 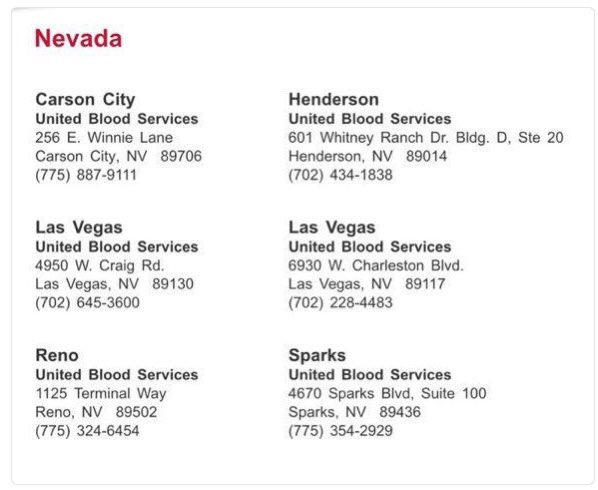